Why Do My Invisalign® Trays and Attachments Stain? 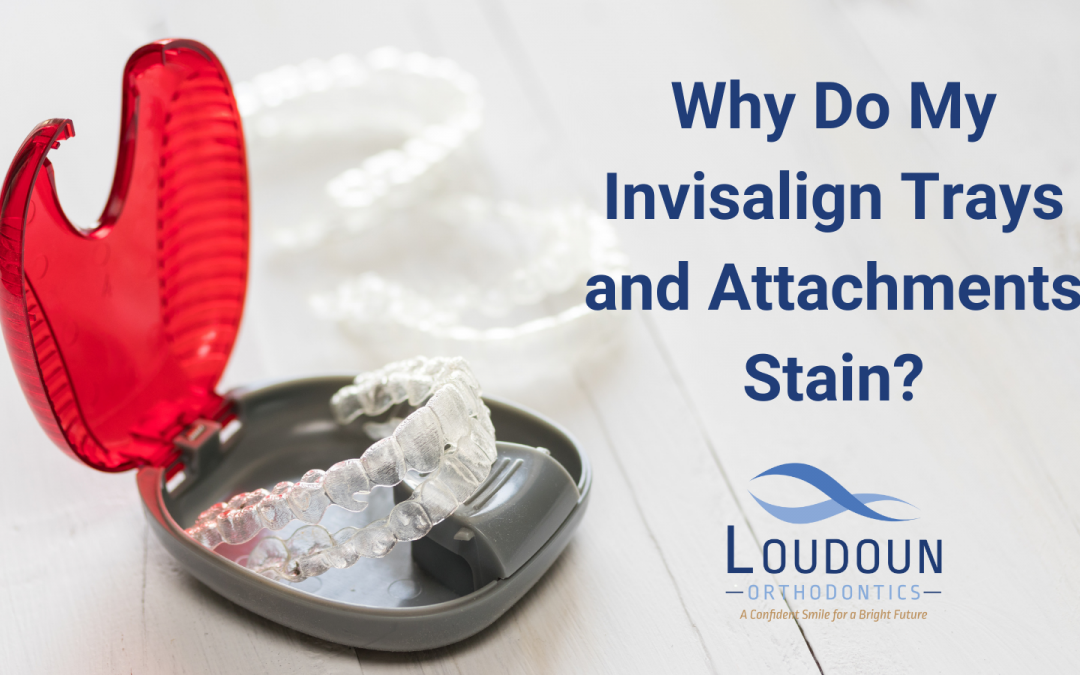 Eddie was delighted with his new Invisalign® system. He had somehow missed getting his teeth corrected during childhood. Now he could get it done without his coworkers seeing braces and getting distracted from his talent and the influence he was trying to build. Then, one evening, after a coffee-fueled, productive day at work, Eddie noticed a yellowish tint to his Invisalign trays and attachments. This would not do! How could he get this fixed?

A significant part of the appeal of the Invisalign teeth straightening system over traditional metal braces is its invisibility. This trait is a paramount concern for adults who don’t want to be seen wearing braces. Why, then, do the Invisalign trays turn yellow? Do Invisalign attachments stain?

Yes, Invisalign staining can happen. But by following the Invisalign manufacturer’s guidelines and with proper care for prevention and cleaning, you can avoid having your secret revealed in an unsightly manner.

For decades, dentists have used metal braces to gradually move their patients’ teeth into better positions for a healthier mouth. Many now use the more advanced and desirable Invisalign system to achieve the same goals for teens and adults.

Instead of metal wires and other hardware, Invisalign uses transparent plastic custom-fit trays (aligners) to move the teeth. The trays are more comfortable and aesthetically pleasing, and they require less time to produce the desired results. They are typically worn for 22 hours per day and can be removed for a total of two hours for eating and cleaning. At Loudoun Orthodontics, it is our primary teeth straightening treatment.

The Invisalign system includes small attachments to help keep the trays working correctly. One type is a set of “buttons” to hold the trays in place. These dots match the tooth color and are placed on certain teeth. While each pair of trays are used only for about two weeks each (after which you progress to the next pair), these buttons stay for the duration of the treatment.

It is possible; Invisalign trays and attachments can stain. But this can be easily avoided, and any mild stains you do get can be cleaned.

The materials of Invisalign products are pretty well resistant to stains. Also, heavy stain build-up is usually not a major problem because they are installed for less time than traditional braces. They are, however, susceptible to strong substances.

The biggest culprits of Invisalign stains are dark foods and drinks, such as:

Align Technology, Inc., the Invisalign manufacturer, provides guidelines for getting the most of your Invisalign appliances. To avoid stains, remove your trays before you drink anything other than plain, cool water, especially if you’re drinking something dark. Then rinse your mouth before putting the aligners back in.

You get several pairs of trays with the Invisalign system. You wear each set for about two weeks, and they are each designed for a particular stage of progress. So set one is not the same as set two. Because the duration of use for each set is so short, if one set is stained, it will soon be replaced by the next, non-stained set. And as mentioned earlier, they can be temporarily removed while you enjoy your coffee.

Keep in mind that your aligners need to stay in for 22 hours per day, so if you really need that coffee, you’ll need to figure out how and when you can have the trays out of your mouth.

The buttons that hold the trays in place stay in your mouth for the full duration of your treatment. They cannot be removed for that glass of red wine. And if they stain, they’re not so easily replaced.

How to Clean Invisalign Attachments and Trays

There are several options for cleaning your Invisalign appliances if they become stained. Depending on your specific situation, some may work better than others. If you’re not sure, ask your dentist what will work best.

Here are some options:

An Ounce of Prevention

The best way to keep your Invisalign stain-free is to follow the guidelines and maintain a consistent cleaning routine. First, take out your trays whenever you want to have that cup of coffee, soda, or anything other than water. Then, rinse your mouth before putting them back in.

You may want to try drinking with a straw. It will reduce the amount of liquid that touches the attachments you can’t remove. It can’t prevent all drinks from making contact, but it can help.

As always, follow guidelines for cleaning the appliances well every time you remove them.

The Invisalign system is a significant improvement over traditional braces. Its invisibility is one of its greatest benefits. You don’t have to explain why you’re wearing braces in your 30s! But if the trays or attachments begin to stain, your secret will be out.

The easiest way to avoid Invisalign stains is to avoid the dark-colored foods and drinks that cause the stains. For some people, though, that may not be so easy. So you either have to make the sacrifice to get that perfect smile or find a way to compromise without staining the appliances.

Your best bet is to follow the manufacturer’s guidelines as much as possible and be very diligent when cleaning the appliances. Then, if you’re very careful, you can have your dark chocolate cake and eat it too!

For more information, reach out today to book a complimentary consultation at our friendly office in Lansdowne, VA! We also invite you to keep up with our blog to get answers to many of the frequently asked questions about maintaining sparkling oral health!