Debunking the Most Common Invisalign Myths 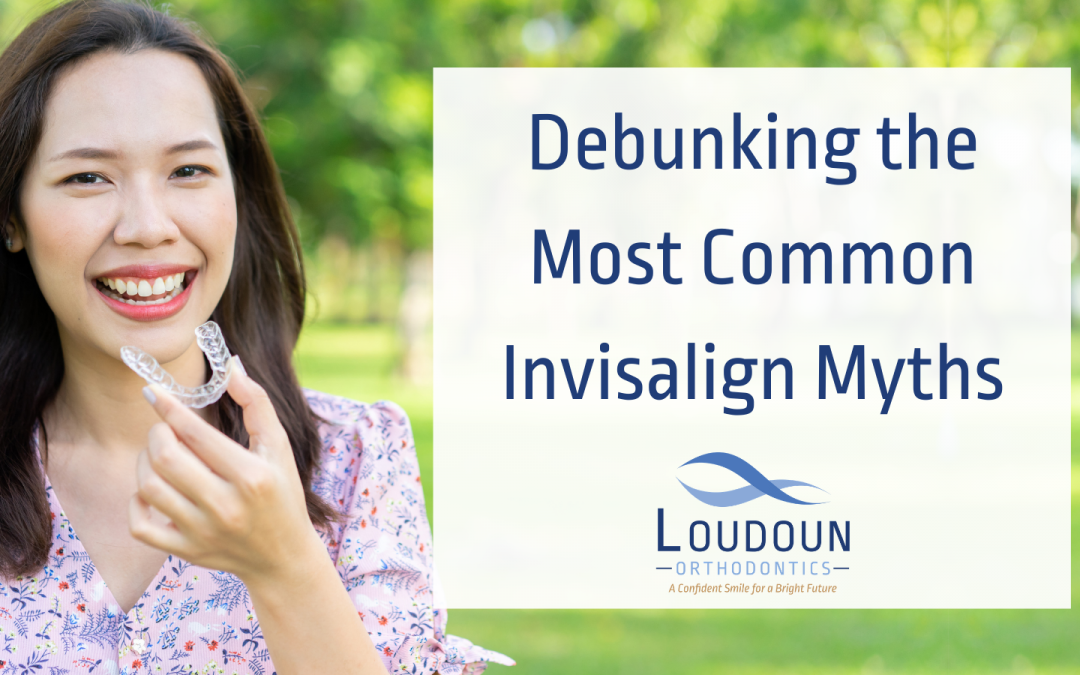 Ever since its FDA approval in 1998, Invisalign®, the invisible alternative to traditional teeth straightening devices, became both patients’ and doctors’ favorite choice as orthodontic treatments. Although some new competitors did make their way into the market in the meantime, Invisalign® managed to stand the test of time and take the crown of teeth straightening away from older, less aesthetically appealing choices such as metal braces etc.

With its easy, straightforward approach based on invisible aligners, Invisalign® will gradually deliver solid results to the patient until they reach that splendid, perfect smile of their dreams. While some people might not believe in Invisalign®’s effectiveness right from the start, the numbers speak for themselves: in 2020 alone, Align Technology sold more than 1.6 million cases of Invisalign®, toppling their 2019 record of 1.5 million cases. It’s clear that more and more patients are noticing Invisalign®’s benefits and are attracted by the prospect of a killer smile without any metal braces!

The Most Common Myths Surrounding Invisalign

Here at Loudoun Orthodontics, we stand by Invisalign® as our primary teeth straightening treatment for both adults and teens with stunning results. Regardless of its tried-and-true approach and benefits, Invisalign® hasn’t been spared by inaccurate myths that sprung up on the Internet and on social media that unwarrantedly tarnish its reputation. We believe it’s our responsibility to sit down and bust these misconceptions once and for all, allowing would-be patients to receive this fantastic treatment with an accurately informed mindset. Let’s tune in to the article and solve the seven most common myths surrounding Invisalign®!

“How could an invisible aligner be more effective than traditional braces?” One might ask. Well, the answer resides in its superior technology. Due to the all-around force of the aligners across the teeth, Invisalign® can provide a better alternative to traditional braces. Furthermore, because it implies no metal wires, Invisalign® will keep you away from annoying mouth sores and help you take better care of your teeth and gums due to easier brushing and flossing.

“You will have to wear braces for about two years.” Words that do not happily resonate in our ears, as the thought of wearing metal braces for 24 months might deter would-be patients from getting their needed orthodontic treatment.

That is not the case with Invisalign®, which, depending on the treatment complexity, can deliver your prescribed smile within 18 months! However, you have to keep in mind that the treatment duration is proportionally linked to wearing the aligners: the more you wear them constantly, the faster your Invisalign® treatment will be over.

#3: Invisalign is All About being Expensive

Right from the very start, Invisalign® is, unfortunately, associated with deterring high costs. However, is that the actual case? While Invisalign® might be more expensive in the short term, because of its shorter treatment duration, you will actually save time and money by cutting down on office visits, making this treatment less expensive than braces over time!

#4: Invisalign is Best Suited for Adults

Another unfounded myth surrounds the age at which you can start your Invisalign® treatment. Aside from adults, teenagers are starting to discover the wonders of Invisalign® as well. In 2008, Invisalign® Teen came to rescue teenagers terrified by the prospect of years of metal braces. Furthermore, responding to the market’s growing demand, Align Technology released an upgraded product version in 2017.

We all know how important physical appearance is for a teenager’s self-esteem, which is why we encourage Invisalign® Teen as a viable replacement for metal braces. As such, make sure that your teenager is wearing their aligners constantly, and they will become more confident both at school and in their day-to-day lives.

“Invisalign® for misalignments? That can’t be true!” Numerous people still believe that Invisalign® cannot treat misalignments. However, orthodontists have the ability to customize your aligners in a way that addresses the patient’s peculiar dental needs. As such, dental issues such as crossbite, overbite, underbite, gapped teeth, and overcrowded teeth can all be treated with Invisalign®!

#6: DIY Aligners are Just as Effective

On the contrary, DIY aligners are ineffective against dental issues and dangerous to the patient’s health! Here at Loudoun Orthodontics, we firmly stand against such practices that might put the patient’s dental and general health in jeopardy. Make sure that you check out the following blog post on the dangers of DIY aligners.

Get your awesome Invisalign treatment now!

Now that we’ve dispelled most of the myths and misconceptions surrounding this fantastic treatment, it’s time for you to begin your own Invisalign® treatment at Loudoun Orthodontics. Are you ready to enjoy your beautiful, perfect smile without annoying metal braces? Go ahead, schedule a complimentary consultation with us, or check out our blog!